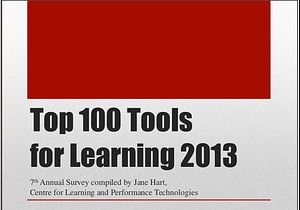 Jane Hart has released her annual survey of the top 100 tools for learning for 2013. Some of the top tools aren't much of a surprise. Between Google announcing it was no longer going to offer their Google reader product (which allowed people to subscribe to different blogs/feeds in one place) and more people wanting to avoid having a bunch more things to keep up with, it isn't surprising that Twitter is once again on top of the list. I've stayed with my newsreader service, called Newsify, though I now subscribe to RSS feeds via a free, online tool called Feedly (#19 on the list).

It isn't surprising to see Evernote so high on the list. They just keep on innovating, making it easier to store and share important information. One of the ways I've been using Evernote lately is to answer students' questions that require a more lengthy response in audio format, from within Evernote. I also have really enjoyed the tight integration that Evernote has with an iPhone app called Drafts, which completely does a 180 on how you think about capturing a thought or a note. With most apps (including email), you start with where to save whatever it is you're typing, or who to send that email or text message to… With Drafts, you start by capturing the thought/idea, and then decide what to do with it.

One of the simple ways I'm using Drafts is to compose and send an email, when I don't want to be distracted by other emails that might have come in to my inbox since I was last on email. It also offers a quick way of sending a text message (far faster than the built-in iPhone messaging app), as well as a speedy way of appending or prepending some text to an existing Evernote note.

Check out the top 100 list from Jane Hart and tell us which ones are your favorites in the comments.