Sorry about starting with a bad, musical pun in the title. I want to share about three powerful exchanges that I have witnessed recently on Twitter. My apologies if you now can't get Three Little Birds out of your head.

Let's begin with an experience most of us have encountered, as shared by Ian Wolf.

She did not blend.

She immediately began to stare at her phone with a single earbud firmly entrenched.

3/ Now, just so y'all know, I'm dynamic AF: high kicks, deep stances, lots of questions and dialogue, and that's just the times when I lecture.

I couldn't get this girl to engage with the class.

I even asked her – politely – to join. She pulled out the earbud for, like, 2 min.

4/ Now old me woulda lost his cool and called her out for being disrespectful and surly.

But when I noticed the earbud go back in, I saw two paths diverge in a yellow wood. I decided to take the one less traveled by.

I figured there had to be a good reason for her.

5/ As I released class, I asked her to hang on for a sec in my most soothing and calm voice. Once everyone else was gone, I didn't tell her what was wrong about how she had behaved.

I asked her if she was okay.

6/ As I was directing her to the campus resources best suited to help, I was struck with the realization I could have utterly lost her as a student if old me had spoken. No question. I would have escalated, she would have responded in kind, etc.

Instead, I just listened.

7/ I never would have grown as an educator without the great insight, development, and tirelessness of those mentioned already.

I'm proud of being better at my job now than I was then; however, I wouldn't be good without better educators to guide me.

A few thoughts that came to mind as I read Ian's tweets… When he mentions that the young woman didn't “blend.” It is impossible for me to read something like that and not go back to this old SNL skit of the bass-o-matic. “Mmmmmmm. That's terrific bass!”

And off my mind goes to the question of “will it blend?” from Blendtec. I'm also having fun picturing Ian doing high kicks and deep stances in his classes. In case he needs it (or some of you do, too), please follow that up with some of these stretches.

In case you aren't familiar with some of the acronyms Ian used. AF is akin to “as heck” – like how so many of us are saying it is cold “as heck” in the midwest right now. Except that isn't quite strong enough, so some people use a word that rhymes with duck instead of using the word heck. Also, TL/DR stands for too long/didn't read. Some people recognize that we may not have time to read the whole article or series of tweets sometimes, so they synthesize it for us. So Ian shortens his series of tweets 1-7 down into “Thanks, y'all.”

Ian's first tweet began by mentioning people who have inspired him in making these changes in how he interacts with students. I didn't want to start with it, lest it seemed self-serving. However, he mentions others who have had a profound impact on me, as well, so here it is:

1/ I need to begin this thread with a big thanks to @bonni208 for stressing kindness in her @tihighered podcast, @Jessifer for vociferously arguing for treating students as people, & @SaRoseCav for showing through her research just how impactful emotion is on learning.
Story time…

I am working on getting a dedicated page on the site for completionists to share favorite episodes, though I haven't gotten to it quite yet. There is a completionists Slack channel, however.

Many of us have received gifts from our students to thank us for our teaching. In this next series of tweets, Viji Sathy tells a story of some earrings a student gave to her. As you might expect, it was so much more than that.

These may look like ordinary earrings. They are not. #TuesdayThanks pic.twitter.com/NY7UtkxpoS 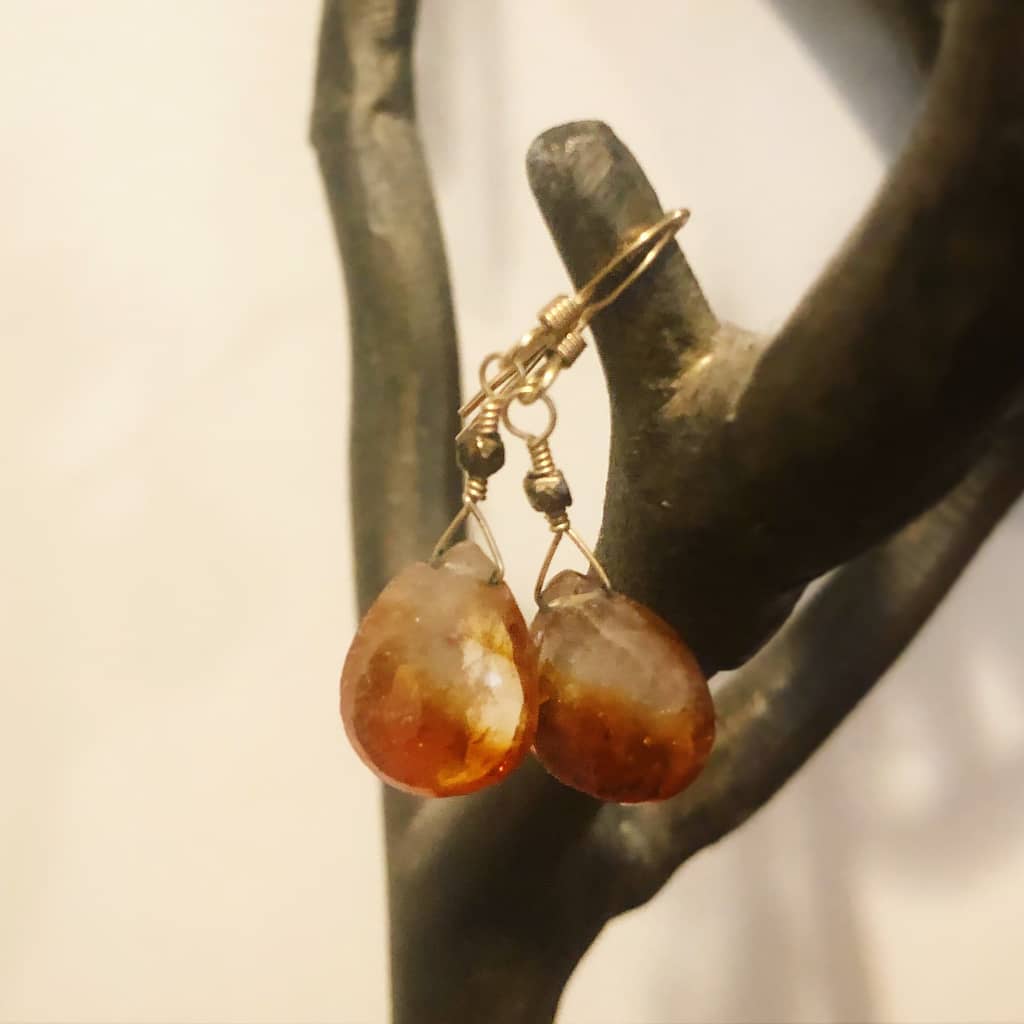 Viji continues on after that with:

After my first semester of teaching I was riddled with self-doubt and wondering if I had taken on more than I could handle. The soundtrack in my head that first year was impatient and unkind. #ImposterSyndrome in full force.

But after the semester, this student stopped by to gift me these handmade earrings to thank me for teaching and demonstrating care in the class.

Semester after semester, I chipped away. I attended #facdev, read a lot, asked for help and advice. Now I find myself in the position to offer #facdev, writing a lot, and offering help and advice.

These earrings stay out to remind me of this wonderful and unpredictable journey.

To my educator colleagues, who may be doubting themselves right now: stay the course, ask for help. Remember everyone has a day 1, or semester 1. We all remember it.

And to that wonderful student, I have so much gratitude for the gift you gave me — and it wasn’t the earrings, but I love them too.

Viji's story reminds me of the importance of committing to lifelong learning in our profession. We may get to places in our teaching where we are effective at coaching others, but there will always be more to discover, fail at, and learn from…

Matthew Cortland Has a Leaky Roof

These past few weeks on academic twitter have been focused a lot on disability accommodations. A professor wound up apologizing for his suggestion that he would not accommodate students' needs surrounding test anxiety. There was this powerful post about neurodiversity. And then there was this memorable series of tweets from Matthew Cortland, esq. 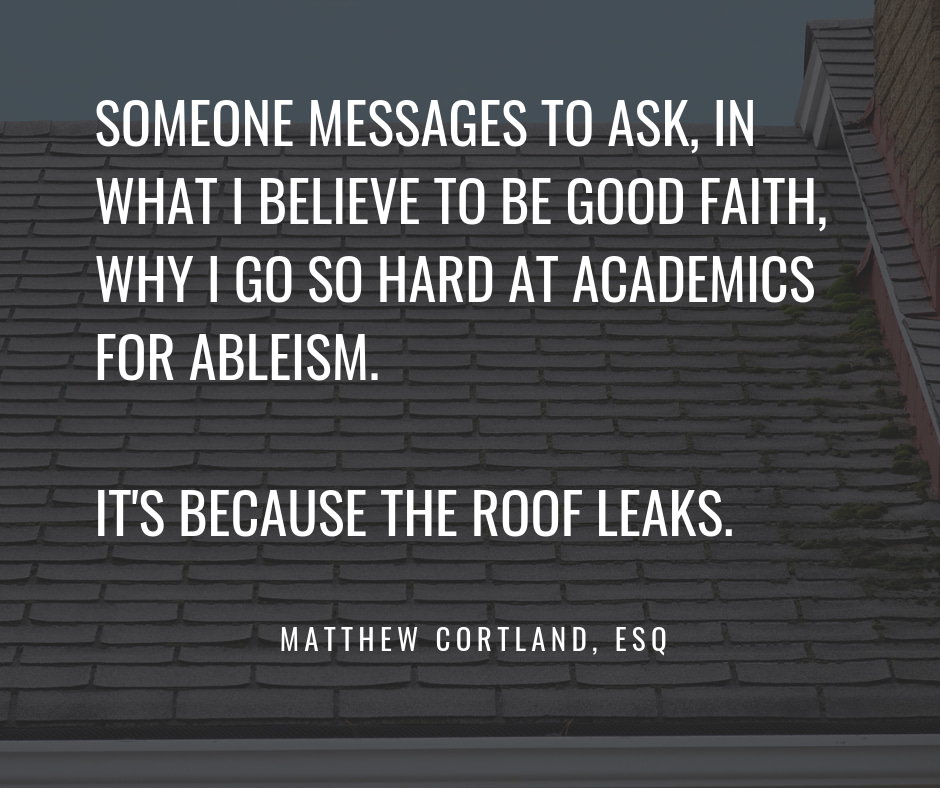 Someone messages to ask, in what I believe to be good faith, why I go so hard at academics for ableism.

It's because the roof leaks.

When it's wet outside, water leaks from the bedroom ceiling. You may ask, quite reasonably, ‘why don't you do something about it?'

Because sometimes I have to pay the rent late.

I was told by law school administration that I couldn't tell professors I had a disability or that I needed accommodations. I have #IBD, my symptoms require, as my accommodations letters put it, “unhindered restroom access.” The law school tried, very hard, to violate the ADA

I had to threaten to sue them to be allowed to tell professors I had a reasonable accommodation on the basis of disability that meant if I needed to go to the restroom? I wasn't going to raise my hand and ask for permission (as some profs insisted).

One professor, upon my disclosing chronic illness said, “you won't need something silly, like a large font, will you?”

When I explained Crohn's, he interrogated me about how he'd know if I was faking or if I was really in the bathroom.

That was the first interrogation of many. I was cross examined, repeatedly, about my accommodations. Even though they were from Uni Dis Services & based upon voluminous medical evidence, were they legit? no, really, how was I scamming them?

Instead of assigning a proctor to stop time when I needed to toilet (as I requested) they gave me 1.5x time on exams. I had final exams (upon which the entire class grade depends) taken away from me before my allotted time had expired. It literally trashed my gpa.

For the entirety of my law school career, I was told every single day, explicitly and implicitly, that I didn't belong, that I wasn't welcome, that the profession didn't have any room for me.

I was told by the professors who were supposed to mentor me that if I got a firm job (and I wouldn't, but if there was a miracle), they'd fire me after a month on some pretext because I “need to use the bathroom too much.”

I have an incredibly expensive education, a license to practice law, a useful skillset. I'm a good advocate.

When it's wet outside, the roof leaks because I never got a firm job, because I'm unemployable because I spend too much time in the bathroom.

Cortland's thread has been added to since I first bookmarked it, including this Patreon page entitled Shouldn't Need to Become a Lawyer. I also noticed a number of powerful videos of him advocating for various healthcare policy issues.

These three individuals really got me thinking about my teacher. I am grateful for their expressions of despair, change, and hope in this place. What have you been reading on Twitter that has been transformative lately?