One of the big principles asserted in David Allen's Getting Things Done is the importance of having a regular “dump” of what's in our brains into some type of capture system. Some of his process of capturing what's on our minds happens in a somewhat prescribed manner, where we look at what projects are on our plates and what next actions relate to each of them. He also has some great trigger lists, where we can read through a list that is designed to trigger our minds to think about stuff that needs doing. The second method of capture recommended by Allen comes more in the moment, as we remember something that needs to be addressed.

I have a few apps that I use when capturing what's on my mind and getting it recorded somewhere. Each of these apps is located on my home screen, so I have easy access to it. 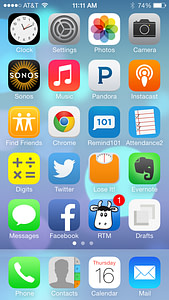 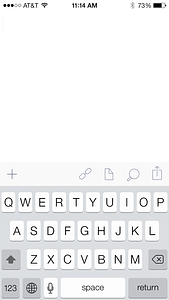 There's no thinking about where to save the information, what tags to add, how to categorize it, etc. There's just a blank slate, waiting for you to record what's on your mind. The processing of what you've captured comes later.

The first few times I heard about Drafts, I didn't get the benefit at all. However, geeks I admire highly kept talking about it, so I decided to give it a try. Now, I have a few things I always do through Drafts, but I'm constantly thinking about other ways I could save time by using the app. Here are a few examples of how I've used drafts:

I have needed to do some health-related tracking, having to do with my pregnancy, multiple times a day. I get the number I need to track and then open up drafts. It presents me with that familiar blank screen and all I do is type the number in. Then, I have a setting that I can access that automatically enters the date, time, and appends the information to a note that I have set up in Evernote. If I tried to do the same thing in Evernote, I would first have to find the note, get my cursor flashing in the correct place and type in all the associated information (date/time) by hand. Drafts makes this process unbelievably fast.

I also have found drafts the fastest way to text Dave (my husband). I open up the app, type in what I want to text him, and hit the link to access my commonly-used functions, one of which is to send a text to Dave. The same process within the messages app on my iPhone would take far more steps.

I've got a demo in the works, where I'll share more about how I'm using Drafts. In the meantime, what tools are you using for capturing your thoughts and actions? What questions do you have about how to get better at doing the capture process?