You’ve decided to purchase an iPad. Now you just need to figure out which of the many models to buy… 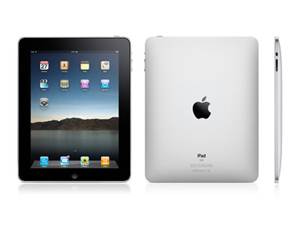 In terms of the various iPad models, there are two broad categories of choice: storage capacity and data access capabilities:

Apple offers three storage capacity options on the iPad. 16GB, 32GB, and 64GB. When you consider your storage needs, consider those media options that you want to have available to you, when you’re not connected to a wireless network (like the ones at your university, as well as all good coffee shops) or to the data plans offered through AT&T (additional monthly charges apply, as you’ll read about later). I tend to like to be able to carry a lot of data with me: music, books, movies, podcasts, as well as applications/programs (which take up space, too). In my case, I chose a 64GB iPad, though recognize that the top-of-the-line iPad costs about what a full-fledged laptop would, so make sure it is really what you need before you go to the expense.

The next consideration is how your iPad will access data that isn’t stored on it locally. All models of iPads can access data over a wireless (wifi) network. Your university almost certainly has universal wifi coverage across the campus, though prior to making your purchase, be sure to check with your IT department to ensure that there aren’t any restrictions to connecting to the wifi access with an iPad. I’ve read about a few universities that don’t allow iPads to hook up, but most do.

The other way that some models of iPads can access data is via a 3G data plan, paid monthly. The 3G has to do with how fast it transfers data (the cutting edge speed right now is 4G, but iPads and iPhones aren’t up to that speed just yet). The data plan is the monthly cost that will come from AT&T for you to have the access.

The great thing about the iPad data plans from AT&T is that you don’t have to pay for the plan those months you don’t need it. For example, if you knew that you wouldn’t need a data plan during the year, because you would access your wifi network at home, at your local coffee shop, and on campus, then you could skip nine months or so of the data plan. If you enjoyed travelling during the summer and wanted to avoid paying $10 a day for hotel wireless coverage, you could sign up for one of two data plans available from AT&T just on the months that you wanted it. It would be great if they would do that for iPhone data plans, which don’t even offer roll-over data plans for the months when you don’t need to transfer as much.

Because of this option to use data plans only in the months you need them, I think the additional $150 for a Wi-Fi + 3G iPad is the only way to go. Yes, $150 isn’t cheap, but without paying that additional amount, you won’t ever be able to use your iPad when you’re outside of a wireless network. The only people who would be smart to go the less-expensive route would be those people who have another means for gaining wifi coverage while on the road, a service/equipment offered by some cell phone companies. A few of your options, such as the Novatel Wireless MiFi card from Verizon or Sprint are described in this article. For me, I’ve got the 3G coverage when I need it (mostly when I travel), but skip the monthly fees most months of the academic year.

When I’m on the road, I often use my gadgets for entertainment, particularly now my iPad, so I go for the $25 data plan when I need it. For an extra $10, I get eight times as much data transfer capability… and if I exceed that amount in a month, I can just pay another $25 for additional capacity. The iPad also gives you a warning when you’ve reached 80% and 90% of your data plan, so you can back off if you want to avoid running out or having to buy more.