I had lunch with a former colleague at Strawberry Farms here in Irvine, CA, recently. What a great opportunity to admire the beautiful flowers that surround the place (see photo), despite the otherwise dreary day. If any of you reading this are locals and want an amazing salad, you can't go wrong with their chicken Waldorf. My lunch companion has children that are 17 and 19, while our kids are two and just four months old. In the course of our conversation, my friend and I lamented about the physical demands that young children take in stark contrast to the cognitive challenges that older kids bring.

The process of parenting can be the great educator: always challenging and always providing new opportunities for learning. Here are three lessons my children have taught me about teaching:

END_OF_DOCUMENT_TOKEN_TO_BE_REPLACED

It is that time in the semester when most college freshmen forget about their professors' feelings (if they ever remembered them at all) and they begin openly discussing how much pain we are all causing in their lives, even if all we're doing is engaging them in dialog in class. They're overwhelmed… exhausted… sleep deprived… and lacking perspective…

I find it encouraging at this point to remember the professors who taught me in college and the impact they still have on me today. I went to Chapman University from 1989 – 1993 and still vividly remember so many of the faculty from my university years.

Dr. Booth is one of those memorable teachers. He just celebrated his 50 year anniversary at Chapman and has stuck in the minds of my parents, who also attended Chapman for their undergraduate years in the late '60s. I wish I could tell you I was a brilliant economics student, but that was hardly the case. I ended up with a C in his class and that was only after getting some help from a roommate and from Dr. Booth, himself.

What I can tell you is that he had an impact on me that goes well beyond the subject of economics.

I remember being scared to death of being late to Dr. Booth's class. He was one of the professors who would lock the door prior to starting class – and if you ended up catching him on a day when he neglected to lock the door and thought you would slip in un-noticed, you were in for an unfortunate surprise.

Despite my lack of economics knowledge, I knew how to get myself places on time, thanks to my Mom's influence. However, there have been many times when I have thought back to the discipline Dr. Booth commanded and that he most likely gave all who encountered him during their college life a gift that went well beyond knowing who Adam Smith is or how supply and demand work together to set prices in perfect competition.

He gave us the gift of self-discipline.

Dr. Booth was not without encouragement, however. I went to see him during his office hours once and remember being really intimidated. He asked me my last name at one point and looked off in the distance for a few minutes. Suddenly, he rose from his chair, walked across the room, and opened a dusty file cabinet that appeared to have been decades old.

His eyes squinted at the old grade book he removed from the cabinet. Then, they lit up and he said, “Ah ha. I thought so… Follow me!”

He took me to a wall full of plaques and awards. Hanging on the wall was a plaque for business students of the year from the 1960s. There in 1967 was my Dad's name: Jim Frazee, hanging on a gold-colored name plate. My Dad never had told me about being awarded such an honor. I'll always be so grateful to Dr. Booth for giving me this glimpse into my Dad's college experience and for showing me how much care was behind his tough exterior. That he remembered my Dad from more than twenty years prior to my coming to Chapman meant so much to me.

He gave us the gift of encouragement 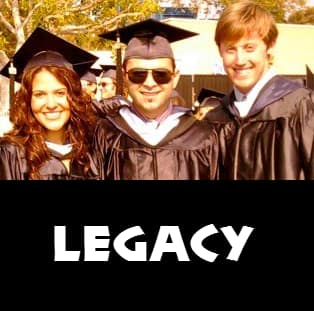 I've only been teaching in a university setting for five years now, so I'm not sure the kind of impact I'll have on my students decades after they graduate. However, Dr. Booth gives me the hope that it is possible to have a life-long influence over our students' lives, even if they are quick to remind us at this point in the semester of how much grief we're inflicting on them now.