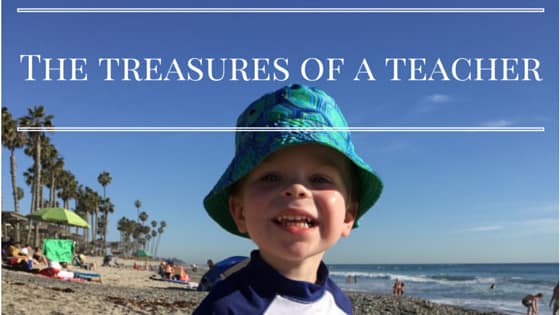 I took our kids to the beach the other evening. Our 3 year-old, Luke, found a penny while we were walking toward the pier. He was thrilled with his find and wanted to put it in one of the parking meters we kept passing.

It was difficult to try to explain to him the errors in his logic.

First off, paying for parking at the beach is only required until 5 pm and we were there after that time. Second, I tried to explain to him that there really wasn't much that a penny would do for him these days. A penny wouldn't even be accepted in the meter, let alone result in any minutes of parking time.

After I told him these things, this was his response to me:

Mommy, this penny is my treasure.

It was one of those “in the eyes of the beholder” moments. I loved that he took such delight in something so seemingly insignificant.

It got me to thinking about the things I treasure the most in my teaching.

For me, its the letters and emails I receive from former students. They remind me of the ways in which I've been some small part in helping another person grow. They remind me that even though students will likely be challenged beyond what they would choose for themselves in the short term, that they have the potential to reap rewards that extend well beyond that final week of classes.

During the stressful final days of the semester, I like to read former students' words of encouragement that remind me of the longer arc of learning we are striving for…

My most treasured letter came from a student who failed her first class with me. She was devastated. At the time, she suspected that she was going to be unable to return to the university the following year.

I listened to her and had her talk through the possibility of not coming back. She was prepared to accept that outcome, though of course she was saddened that it would set her back so much in her life.

The following year, she was able to return. She took the class, again, and this time earned a C. Each class she took with me, she told me she worked harder than she ever had in college.

I would sometimes stay late in the evenings to study with her and others in the classes. It was rewarding to watch her put forth such effort, despite the fact that she wasn't able to accomplish the specific grades I know she wanted.

As is so often the case, her graduation seemed to come so quickly. She dropped a letter off for me in my office as the last week of classes was ending.

In it, she wrote about how much I had meant to her as a professor. She said she appreciated that not only did I challenge her to do more than she ever thought she was capable of, but that I believed in her more than anyone else ever had.

Most of the letters that students write wind up getting scanned and put in to a folder on my computer for my post-tenure review or future promotion portfolio. While I have scanned hers, just in case something were to happen to it, the physical copy of it has remained in my desk hutch all this time.

I can see the lines of the back of the piece of paper paper all the time when I'm sitting at my computer, knowing the precious treasure of words that sits inside those folds.

Yes, Luke, I understand what unexpected treasures we might find on our journeys. Thank you for reminding me of that with your penny the other night.

Speaking of which, I don't think I took the penny out of my pocket. By now, it has probably gone through the wash. Sigh.

[reminder]What is a treasure in your teaching that you've collected?[/reminder]