I recently wrote a post for the Mac Power Users about my top ed tech tools. In the comments, someone asked a question about how I create pencasts with my LiveScribe SmartPen. I thought I would broaden the question a bit and share about how I create micro lectures, with pencasts being just one of the ways that task can be accomplished. 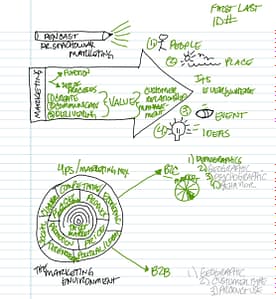 Whenever we move to an online environment, we must be aware that our learners' attention spans will be shorter. While in a classroom environment, we might think about having a 50 minute lecture (though the hope is that we are actually not ever lecturing for more than 7-10 minutes without some kind of test for understanding or engagement, even in the classroom).

Online, that same 50 minutes might be broken down to five micro lectures with some means of assessment or reinforcement in between.

When I create micro lectures, my goal is twofold:

The term, pencast, denotes that audio can be heard (like a podcast), only you can also see accompanying sketches and notes that are in sync with the spoken audio. I encourage you to check out some of the examples on the LiveScribe website to get a flavor of how they work.

I have owned every version of LiveScribe smart pen since they were first launched. I have somewhat of a love/hate relationship with them. 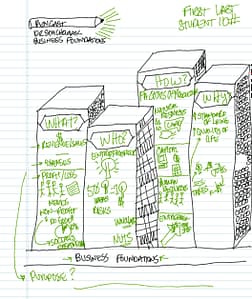 On one hand, it is incredibly convenient to record a pencast. You need the special notebook paper that is recognized by the smartpen and you need your smartpen. For the most advanced model of their smartpen, you also need to have an app running on your iphone/ipad to capture the audio (it uses the microphone on your phone, instead of having an internal microphone, like some of the earlier models).

I've regularly asked the students who earned an A in my courses what tools they found most helpful in their learning and pencasts come out on top every time.

I haven't ever come across a student in my ten years of teaching who has been taught about visual note-taking in school before, so it takes some time to get them thinking in this way. By watching the pencasts, I am effectively educating them both about the topic being taught, but also about how to take concepts and capture them visually.

Wesley Fryer, who blogs for a K-12 audience, has an extensive set of resources for visual note taking that are applicable to higher ed, too.

The biggest disadvantage for LiveScribe pencasts has been that they have not been reliable in terms of playback/sharing methods.

Early on, they started by having playback occur via their proprietary system. It was not a reliable way for students to view them, because it was so highly dependent on what browser they used and what version of their browser they were on.

Then, they shifted to having the pencasts play from within Evernote. The same challenges persisted.

With their latest pen, they have PDF as the means for sharing pencasts, only the non-static part of the PDF can only be played/accessed either by using the website they have set up to play them for users, or via their mobile app.

It is hard to figure out why they haven't gone over to a more reliable sharing method, after all the time they have been at it.

Yet, I still keep buying smart pens, so they must be doing something right.

In answer to the commenter's question, I'm not sure if Notability has some of the same sharing limitations as LiveScribe, as I haven't had a lot of experience using it.

However, I have heard great things about the share-ability of the Explain Everything App.  Its output options include: save to camera roll (on your iPad), save to ouTube, and a bunch of other sharing options. Here's Stephanie Castle explaining how to use Explain Everything in the classroom.

If you want to stay away from hand-drawn micro lectures and want to use other options, Wesley Fryer has a host of tools to create micro lectures in other formats to explore.