I've fallen victim to it many times. I think I understand a situation completely and discover that I was missing some fundamental pieces of the picture. 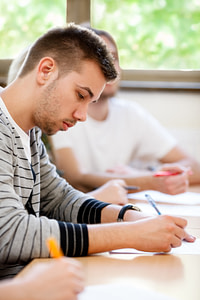 A couple years ago, I had a student who seemed like a complete jerk. He regularly came in late and seemed so disengaged. He seemed like someone so resistant to learning. Toward the end of the semester, he emailed me and asked to meet with me. I prepared myself for the typical end-of-semester conversation, where all the excuses come out and the dreaded requests for do-overs.

He actually wasn't even doing that poorly in the class, so I'm not sure why I felt so primed for him to ask me for favors. He showed up and started his story out slowly. He hadn't wanted to come see me that day, but his Mom had encouraged him to have a conversation with each of his professors. It turned out that he wasn't there to make excuses, but to share that his Dad was in a hospital bed, dying of cancer. He thought I should know, but didn't want to get pity from me. That had been the biggest thing that had held him back from making the appointment with me previously.

While I am less-than-pleased with how I made assumptions about him from his behavior in my class, I am glad that I managed to avoid doing that during our dialog. Somehow, I knew not to assume anything about how he felt about the situation with his Dad and just asked questions. They weren't that close. In fact, the cancer had been something that had brought them back together, after many years without speaking. It was mostly his Mom who had raised him. He seemed to recognize the complexity of his feelings and that how he felt that very day might not be how he felt years down the road. I mostly just listened and asked questions.

Don Miguel Ruiz reminds us to avoid making assumptions, as one of The Four Agreements. We are encouraged to ask questions and to be clear about what it is that we want (with others and with ourselves). When he was alive, Stephen Covey regularly shared his story with audiences of his experience on a subway. He was angry with a fellow passenger for not better controlling his children. They were throwing things and disturbing Covey and the other passengers.

He had a difficult time holding back his anger and asked the man to please control his children better. The man responded that, yes, he knew he needed to get them under control. It was difficult, though, because they had just come from the hospital, where their mother had passed away. Covey recounted how he instantly transformed from anger to a feeling of wanting to help. 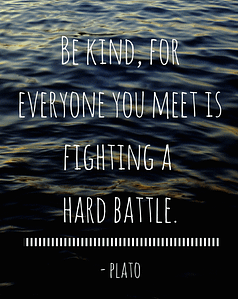 “Be kind, for everyone you meet is fighting a hard battle.” -Plato

[Note: This quote is often attributed to Plato, but may very well have been from another source.]

This doesn't mean that we don't have standards about respecting each other in the classroom or expect students to engage in an appropriate manner for higher education. Right before graduation, I saw the student whose father had been in the hospital in the last stages of cancer a few semesters earlier. His father had passed away. While he did grieve the loss of who a father might have been to him, the student hadn't known his father well enough to yearn for him, specifically. He was excited about graduation. He could know that he was going to walk across that stage and be handed a degree that he had earned. It wasn't a degree of pity; it was one of accomplishment.

A close friend of mine had lost her father while in college, too. Her story was different. She had been quite close with her Dad and was devastated by the loss. She failed many of her courses that semester and took longer to graduate than a typical four-year plan. One of the things she talks about that she treasured about her undergraduate experience was the faculty who cared so well for her during that season in her life.

Her first few years out of college, she worked at the same institution that had supported her after her father's death. The professors worked with her to re-take the courses she had failed and she also got to graduate from college, knowing that her degree was one that she had earned. As a working professional now, she knows she had the resilience and courage to make it through a difficult time and is aware of how to care well for others who experience tragedy in their lives.

Leave a Reply to Scott Self Cancel reply