A student posted the following question on Facebook asking a question about the type of master's degree she should pursue: 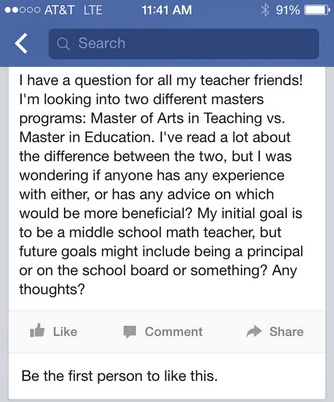 I decided to inquire with some of my doctoral students over on Twitter. They gave her some good advice, but it was going to be difficult to share the full picture with her, since she isn't on Twitter. Even if she was a regular Twitter user, it can sometimes be cumbersome to follow conversations over there, if you are new to the way that Twitter virtual dialog occurs.
I instantly thought that this was a perfect application of a website I had heard of, but hadn't tried: Storify.
You can see, below, how I was able to place the individual Tweets in the order that made the most sense. Storify offers plenty of other social media content sources to choose from: Twitter, Facebook, Google+, Getty Images, YouTube, Flickr, Instagram, or you can Google anything or link to just about anything.
If you're reading this story on email, as a subscriber of our Teaching in Higher Ed weekly updates, you may not be able to view the embedded Storify story, below. If that's the case, you may want to view this article on our website, so you get to see just how Storify works.
The story above took me less than five minutes to create and this was my first time giving it a try. I can send people to the story link, which looks like this:
https://storify.com/bonni208/advice-on-getting-a-master-s-for-educators
But, there's also the option to share it directly on sites like Twitter, Facebook, or Google+. The site also allows you to embed stories on your website by copying the embed code, as is shown below: 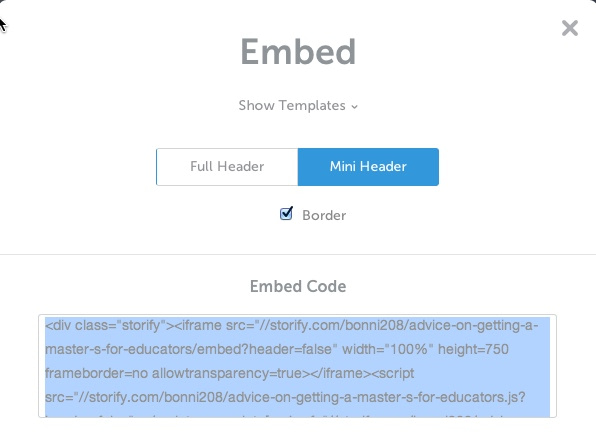 I highly recommend Storify and suspect that I'll be finding even more uses for it in the future.
Bridget Gelms describes various ways she sees for using Storify in higher ed. Kelly Fincham shows how journalism professors could use Storify, though her advice seems to apply even more broadly than that. Finally, Tanya T. Sasser shares how Storify is central to her teaching students how to research.
In what ways can you see Storify being used in your teaching?